Welcome to our New Chapter President

Linda Burke, Esq.
Science was not Linda’s bag.  She was a government major undergrad and has practiced corporate tax law, with some digression into employee benefits, for 45 years, now retired.  But she knows science is important to the success of a nation and was more firmly persuaded about that fact by her good friend, neighbor, and former ARCS National President, Jeanne Berdik.   She joined ARCS Pittsburgh in 2007, to support science in Western Pennsylvania’s universities as an endeavor of philanthropy, but not necessarily of personal interest.  Not one to stay undercover, Linda was immediately recruited to serve on the Chapter’s Development Committee.  She loved the unifying women’s mission that motivated this work, and gravitated to more ways of helping fulfill it.  She became a member, then chair, of the Nominating Committee, Scholar Relations chair, Membership chair, most the while serving as the appointed Parliamentarian, and taking on special projects, such as leading the effort to update the chapter’s by-laws.  She and her late husband, Tim, have supported one half of a named award for four scholars, an experience that is gratifying and energizing.  Over the years, Linda has even come to love the science shared through ARCS Pittsburgh’s many programs and events. 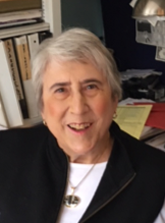