Hi everyone and thank you all again for being here. My name is Alyssa Lawler and I am a third year ARCS scholar and PhD student in Andreas Pfenning’s Neurogenomics Laboratory at Carnegie Mellon University. My official affiliation is with the Biological Sciences department, but the work I do spans basic biology, neuroscience, and computational biology.

Often when we think about DNA in the genome we think only about the parts that produce proteins which then form the major components of cells throughout the body. These are certainly very important, but what sometimes goes unappreciated is that in humans for example, there are only ~20,000 protein coding genes, which together make up just ~1.5% of the DNA in our genome. We don’t understand a lot about the function of the other 98.5% of our DNA, but we do know that it contains millions of small regulatory regions that are responsible for controlling the protein coding genes. These are extremely important because they help determine and maintain cellular identity. Every cell in your body has the same DNA, same set of instructions, yet, a heart cell looks very different from a skin cell looks very different from a brain cell, etc. In part, that’s because the activity of the regulatory regions in the genome tells the skin cell to produce skin cell proteins and the brain cell to produce brain cell proteins in the correct amounts and in the appropriate context.

I study the function of regulatory DNA in the brain. Underlying the brain’s ability to compute information and tune complex behavior is a diverse collection subtypes of neurons. Again, these different cells rely on DNA regulation to know what their specific job is and how to function correctly in that role. A lot of the information on how this works must be encoded into the DNA sequence itself, but the data is on such a large scale that it is uninterpretable to the human brain. I’m leveraging machine learning models to “decode” the DNA regulatory programs that distinguish different types of neurons.

Emerging evidence suggests that defects in regulatory regions of the genome are major contributors to neurological and psychiatric disorders. It’s easy to appreciate that if a person has a mistake in their DNA in a protein-coding region, that protein may function incorrectly and this could lead to disease. This was the prevailing model of genetic diseases for many decades. Due to exponentially decreasing costs of high-throughput sequencing data, the 21st century brought the first large-scale statistical studies for identifying genetic mutations that cause disease. It was widely assumed that this would straightforwardly resolve the mechanisms of genetic diseases. To the research community’s surprise, only a few protein coding mutations have been identified. Instead, we see hundreds of mutations in non-protein coding regions that contribute to disease. My research group attempts to understand how these disease-associated mutations affect gene regulation in a cell type-specific manner. Specifically, I have a project focused on gene regulation in inhibitory neurons during Parkinson’s Disease progression.

I absolutely love the work that I do and I could not have done it without the support of the ARCS Foundation. I want to stress that my ARCS Award was a large part of my decision to come to Pittsburgh for my graduate work. I was recruited by several programs during my graduate school search. After visiting Carnegie Mellon, I was really impressed by the quality of research and I felt that my lab of interest and many other local groups were well-positioned to make a large impact on the fields of neuroscience and disease genomics. However, I was offered a prestigious award to attend the University of Virginia instead. I put off the decision for as long as I could until finally, a few weeks before the decision deadline, I received a skype call from the CMU Biology department offering the ARCS Award if I joined CMU. That made it an easy decision for me and every day I am thrilled with the outcome.

Since starting at CMU, the ARCS award has made it possible for me to have the computational resources I need to handle large genomic data sets. For example, I was able to purchase a new high-storage computer without compromising my rent or food money. Pittsburgh is an emerging leader in research and technology because the Pittsburgh community supports and encourages their universities. The Pittsburgh chapter of ARCS is doing wonderful things to unite people toward this goal. I want to sincerely thank all of you for your involvement in ARCS. The scholars truly appreciate everything the organization is doing, all the hard work that goes into it at every level. 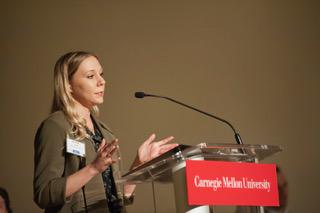