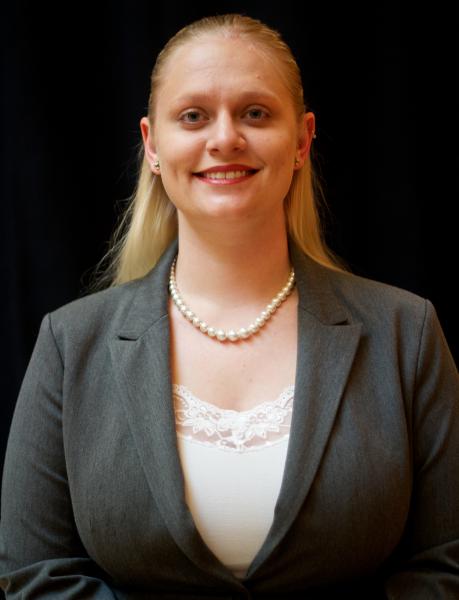 I bought some analysis software with my ARCS money,” said Brooke Sullivan, third-year ARCS scholar at Pitt.  “We have it in the lab, and now I also have it on my home computer.”
The lab for Brooke is Dr. Bob Hendrick’s immunology lab.   There, they study the immune system, specifically what the immune system does to keep the herpes virus latent.  Otherwise, years later, the herpes virus can re-awaken to cause cold sores, or even blinding lesions on the eye.  “Fifty to 80 percent of people have herpes simplex by the time they’re adults,” said Brook.   “But most of us don’t get cold sores, thanks to our immune system.”  In the lab, Brooke’s team studies how the immune system keeps the virus latent and hiding in our neurons.    When the virus does appear as a lesion, it’s been triggered by stress, the menstrual cycle or trauma, which re-starts its replication cycle.  “How can we boost the immune system and understand exactly why the virus remains latent?” Brooke asks.  “We start by studying the cells.”  Researchers think CD4 cells fight viral infections, especially a cold.  But CD4 cells regulate CD 8 cells and secrete certain chemical signals that change what cells do.    “If we really understood what these CD4 cells do,” Brooke says, “we could manipulate them to help people’s immune system stop a recurrent herpes action.”
To mimic human illness in the lab, they infect anesthetized mice with the herpes lesions that cause blindness.   They wait 30 days for the virus to go latent.  Then Brooke harvests the neurons with tweezers and, under a microscope, examines the cells hiding inside.
When she’s not working, Brooke enjoys “board game nights” with other graduate students, or makes a big pot of chili and watches Sunday afternoon football games with her new husband.   Brooke married Kyle Thomas last August in Nebraska, so her name will soon change to his.  They live in the Friendship section of Pittsburgh.  “I love to cook and bake,” she adds.  “I’m known for my make-from-scratch lasagna.”  Back home in Omaha, Nebraska, Brooke used home-canned tomatoes and neighbor-grown beef for her lasagna.
Brooke notes that Omaha is only one degree of latitude different from Pittsburgh.  “The weather’s a little worse, though,” she laughs.  “For months, it’s above 90 and just as humid.  We don’t have a much color as Pittsburgh, because it’s open land.  But you get a lot out of the sky.  You see storms coming.”  Brooke and Kyle, a broadcaster for both radio and TV, are happy in Pittsburgh.  “We’ve especially enjoyed the symphony tickets Beth Wainwright gave us,” Brooke said, and Pirates games in the summer.
The ARCS grant has also enabled them to stash away a little money each year to pay undergraduate student loans.  Someday, Brooke hopes to teach science at the undergraduate level.   As an undergraduate herself at the University of Nebraska, Brooke won an award to do NIH-funded science. “I was inspired by my teachers those years.  I’d like to pass that on to other students who are interested in science but don’t even know it.  I didn’t know how much I would love science.”