All of our scholars have “research advisors” with whom they work in areas that eventually become independent Ph.D. research areas for themselves. Thus, our outstanding scholars stand on the shoulders of nationally recognized scientists.  Dr. Neeraj Gandhi, Professor of Bioengineering at the University of Pittsburgh Swanson School of Engineering, recently received a $1.5 million award from the National Institutes of Health to explore the question: How does our brain perceive moving objects? Since our brains take about 50-60 milliseconds to put together an image of moving objects, how does our vision compensate for the lag in time when the world around us keeps moving?  Dr. Gandhi himself was an ARCS Scholar at University of California San Francisco/University of California Berkley (joint bioengineering program) in the 1990s.  He knows well the importance of the award for his own professional advancement and is thrilled to mentor the next generations of ARCS scholars in his Cognition and Sensorimotor Lab at Pitt. 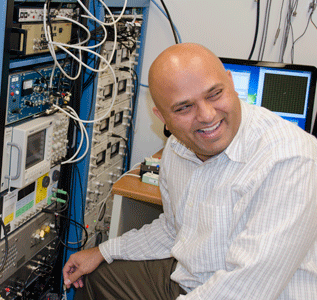