Good evening everyone, and thank you to Kathy and Pam for giving me the opportunity to speak to you about my research and what ARCS support means to me. Over the past two years I have gotten to know many of you, but let me reintroduce myself. I am a third-year graduate student at the University of Pittsburgh in the Bioengineering PhD program, with an emphasis on Neural Engineering. I work in the laboratory of Dr. Raj Gandhi, where we study how the healthy brain produces eye movements.

My research project focuses on something I like to call an “oculomotor brain computer interface.” A brain computer interface, or BCI, can simply be defined as a system that connects the brain with the outside world. I’m sure many of you have heard about the amazing research that has been done on neural prostheses for lost arm function, especially by researchers here in Pittsburgh. With these types of BCIs, the individual simply thinks about moving their arm and a robotic arm will move so that they can accomplish their goal. For some, the goal may be eating a chocolate bar; for others, it may be fist bumping the President of the United States.

Now how does this all work? In short, there are many neurons in the brain that modulate their activity when someone is planning to make a movement. With a neural prosthesis, a small handful of these neurons are recorded, and this recorded activity is quickly turned into a real-time prediction of where the person is attempting to reach so that the robotic arm can move in that direction.

Now although BCI work started out with the clinical emphasis of restoring lost motor function, and remains that way to a large extent, many researchers are now applying this idea of BCI—that is, recording neural activity to control an external device in real time—to the research of basic neuroscience questions. By manipulating the mapping between brain and machine—for example, moving a cursor to the left when the brain is sending a signal for a rightward movement—we can force the neurons to deviate from their normal pattern of activity, and through that we can get a better look at how the neurons interact with each other to produce a movement.

The goal of my research is to take these ideas developed from BCIs for arm movement and create an eye movement BCI so we can better understand how populations of neurons work together to produce eye movements. To do this, we record from a small sample of neurons in brain areas that are involved in eye movement while visual targets are presented on a TV screen. We are first demonstrating that we can use this neural activity to predict which target the eyes will move to with a high degree of accuracy. The next step is using this neural activity to move a cursor to the predicted target location in real time instead of the eye.

Developing an “oculomotor BCI” will give us scientists a useful tool to address many unanswered questions, such as how we always perceive the world around us as stable, even though moving our eyes should cause us to perceive a blurry image during each movement. Not only that, but one day it might be used much like a neural prosthesis to restore proper motor function in individuals who have lost the ability to properly move their eyes.

The support I have received as an ARCS scholar has been an integral part of both this research and my own life as a PhD student. With funding from ARCS, I had the opportunity to attend a large national conference called the Society for Neuroscience Conference, where I was able to discuss my research ideas with experts in my field during the crucial stage of forming my initial research project.

More generally, ARCS support has provided me with a sense of financial security because of the flexible nature of this scholarship. Since I am not required to allocate the funding only to research-related expenses, I have been able to use ARCS funding to live in a nice area of town with an easy commute to campus. The improved general wellbeing that comes with being an ARCS scholar is something I do not take for granted.

The ARCS foundation has supported me more than just financially; it also has provided me an inviting community to which I feel I belong. I have been mentored by Kate Freed, Sarah Jones, and Pam Meadowcroft, my named donors, and Sarah even graciously offered to have me join her family for Thanksgiving dinner my first year here. You see, when I moved to Pittsburgh, I knew absolutely nobody. Through ARCS, I immediately felt like I belonged here, and it gave me the confidence to pursue my research with focus and direction. With the fundraising events hosted by ARCS—such as the summer music and wine event—I even have a good excuse to take a break from my research once in a while to practice playing the French horn.

So with that, I’d like to thank all of you donors for your generous support of student scientists like me and my colleagues here. I’d especially like to thank my named donors—Kate, Sarah, and Pam—for their support and mentorship over the past two years, as well as the current ARCS board members for all the work they do to make the Pittsburgh chapter flourish. Thank you all again for everything you do to shape our research and our lives. 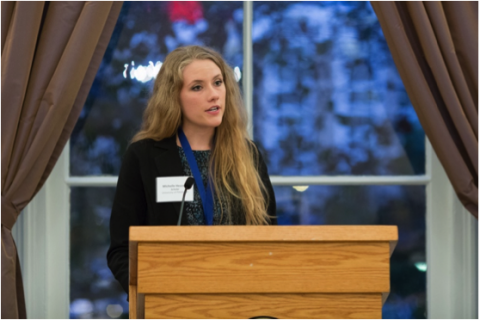