Good evening. Thank you for the opportunity to speak to you today and thank you to everyone in ARCS for being generous donors, supporting and showing interest in the research we are conducting. I am a third year graduate student at the University of Pittsburgh in the Molecular Genetics and Developmental Biology PhD program, where I study kidney development in the laboratory of Dr. Jacqueline Ho at Children’s Hospital of Pittsburgh. Why study kidneys? Well, we need kidneys for various essential body functions, including waste excretion, fluid and salt balance, blood pressure regulation, and red blood cell production. The functional unit of the kidney is the nephron and humans are born with somewhere between 200,000 and 2 million of them. The nephrons can repair after injury but cannot regenerate if the damage is severe. We constantly lose nephrons but that is okay because most of us have so many extra. However, the people with fewer nephrons or abnormally formed nephrons are at much higher risk for developing kidney disease. Unfortunately, there is little doctors can do to treat failing kidneys and for many patients, this leads to kidney transplant or dialysis, neither of which is a cure for kidney disease. According to the Department of Health and Human Services, 100,000 Americans are waiting for a kidney transplant, making up 80% of all people on the national organ transplant waiting list. However, only 17,000 transplantations occur each year. Each day 100 people are added to the kidney waiting list, 10 people die while waiting for a transplant, and 10 people become too sick for transplant and are removed from the list. The people lucky enough to receive their transplant often have to wait three and a half years. Beyond that, having a transplant means taking immune suppressing medications lifelong, which leads to complications related to infections and cancer. And this number of patients with renal failure is only expected to increase along with the increasing rates of obesity and diabetes because these conditions increase the risk for developing kidney disease. Unfortunately, the number of kidneys donated each year has remained mostly stagnant and cannot keep up with the increasing demand. When my grandpa was in his late twenties he was diagnosed with type I diabetes and learned that he had only one functioning kidney. By his late thirties he had his first heart attack. By his late fifties he was in end stage renal disease. Since there was no chance of him receiving a kidney from the national organ donor registry, my mom elected to donate her kidney. Her kidney was only a 50% match, so the high level of immunosuppression that my grandpa required to not reject the kidney allowed various infections to take hold and the transplantation failed after a few months. He remained on dialysis for a few more years before dying from his bad heart and kidney. After witnessing what kidney disease does to a person, I decided that I wanted to study science and learn how I can prevent other families from going through the same ordeal. I decided to study genetics at Michigan State University and learned about the inheritance of genetic diseases, including the one my grandpa and the rest of his family suffer from. Now I study kidney development at the University of Pittsburgh. My thesis project is focused on how low oxygen levels—also known as hypoxia—control the development of the cells that will form the nephrons of the kidney. These cells are known as nephron progenitors and they live in relative hypoxia during normal kidney development. We propose that prolonged hypoxia during kidney development prevents these nephron progenitor cells from developing properly. This can result in the formation of fewer or abnormal nephrons and increase an individual’s risk for developing kidney disease. The scientific community still has a lot to learn about how the kidney develops and my research will contribute towards advancing our knowledge of this process. The more that we learn about the intricacies of how embryonic kidney cells develop into an adult kidney, the closer we get to successfully growing kidneys in a laboratory that we could then transplant into patients on the kidney transplant waiting list. We are a long way from being able to do this, but hopefully in my lifetime laboratory-grown kidneys will be reality. With the ARCS scholar award I am able to pay off my student loans and attend scientific conferences where I can learn about the recent advances in kidney development research. Thank you, again, for supporting us researchers as we push the limits of scientific knowledge to find ways to improve human health and society. You all help to make this possible. 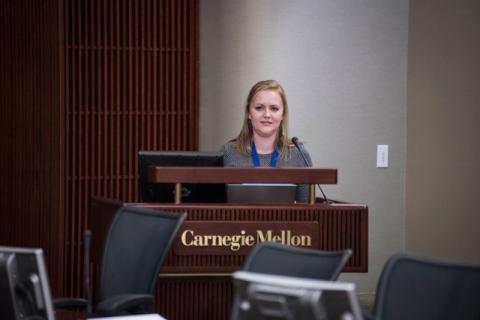